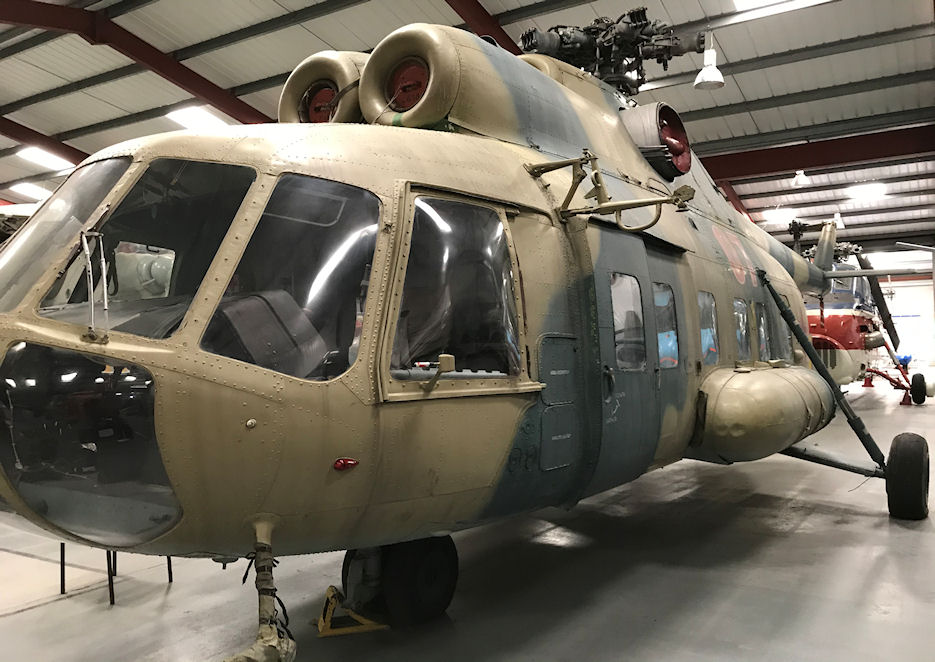 Note: A rugged utility helicopter still in production with more than 12,000 built to date. This one was used by the Polish Air force for VIP transport. Displayed in Russian colours following filming for the 2019 movie 'Black Widow'.

Details: First flown in the early 1960s as Russia's first turbine-engined medium transport helicopter and with a large open cabin with rear ramp access, the Mil Mi-8 family was an important military and commercial helicopter during the Cold War period, providing the Soviet Union and her Warsaw Pact neighbours with a valuable assault transport capability, but also helping to open up the Siberian oil reserves and connect remote communities. The design also represents the transition and development of Russian helicopter technology in the 1960s and complements its piston-engined predecessor, the Mi-4 which The Helicopter Museum also has on show.

The Mi-8 and its derivatives soon became the standard Soviet and Warsaw Pact countries' military utility and assault helicopters, some with increasingly varied and heavy weapons fit, though the weight of these armaments, which included rocket launchers and anti-tank missiles, made it necessary to reduce the number of troops that could be carried. Many passenger versions have been sold to civil operators worldwide. A rugged stalwart, the aircraft was later further developed into a wide range of variants under the Mi-8/Mi-17/Mi171 banner and continues in production today, with more than 12,000 built to date, serving with both military air arms and civil operators, some supporting the United Nations and other aid organisations in a number of countries and around the world.

About fifteen of the Mi-8P, Mi-8PS and Mi-8S passenger variant helicopters, with rectangular windows, were supplied to Poland. Serial 618 was manufactured in the Kazan factory, in the then Soviet Union, in June 1972 and delivered to the Special Air Transport Regiment (SPLT) of the Polish Air Force in Warsaw, as a Mi-8PS, in the red and white national colour scheme, in September 1972. It was used, initially, as an executive transport but was later modified to Mi-8P configuration with green and sand camouflage, for use with 37 Air Group, Leznica Wielka, as an air ambulance, an airborne command post and as a troop transport. It was withdrawn from use in 2006 and parked in open storage at Leznica.

Following a personal request to the Polish Minister of Defence, the aircraft was later allocated to The Helicopter Museum in 2007 but complications in clearing the donation and organising movement of the 18 m (60ft) long aircraft delayed delivery. Eventually clearance was achieved via the Polish Aviation Museum and fuselage arrived at Weston-super-Mare on 5 February following a three day journey by road. Major components including the main rotorhead, gearbox, blades, tail rotor pylon and main landing gear arrived the following day. Reassembly began almost immediately but was prolonged due to other restoration priorities. Meanwhile the aircraft went on display in the Conservation Hangar before finally going on permanent display in the main hangar on 3 September 2011.