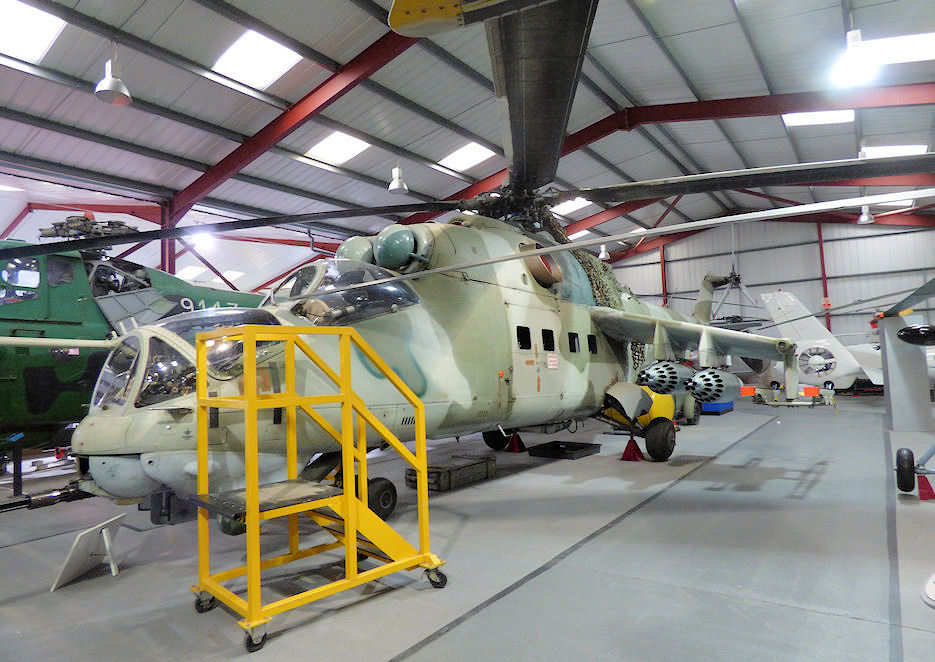 Note: The M-24D Hind was the most heavily armed attack helicopter of the Cold War. This one served in the East German Army prior to unification with West Germany in 1991..

Details: The Mi-24 is a twin-engine Russian helicopter gunship developed as an anti-tank attack helicopter in the early 1970s for operation against NATO armoured forces on the mostly flat and open plains of Eastern Europe and Russia. This example was operated by the former East German (NVA) Army at Basepohl North East of Berlin prior to reunification, and then by HFLG-80 of the German Air Force until disbanded in 1992.

Designed by Soviet designer Mikhail Mil and developed from the Mi-8. It has a crew of two in tandem cockpits and can carry 8 troops in the internal cabin. Firepower includes a 4-barrel 12.7mm Yak-B Gatling gun and 7.62mm machine gun. External hardpoints on the external winglets can carry rocket pods, bombs and anti-tank missiles making it a formidable fighting machine.

Named "Hind" by NATO, it entered service with Soviet forces in 1970 and was used extensively during the 1980-89 Soviet-Afghan War, Iran-Iraq War, Gulf War in 1991, in Coatia, Kosovo, Chechnya, Crimea and in Syria. 2,648 have been built and used by the Russian Air Force and 48 other nations. Export versions Mi-25 and Mi-35 are known as Hind D and Hind E. The Mi-35 version is still in production.

Larger than contemporary Western attack helicopters, the Hind also differs in having a troop cabin available for casualty evacuation, troop insertion and similar roles. The pilot (rear) and weapons operator (front) sit in an armoured nose section, which features the turreted 12.7mm multi-barrel machine gun and under nose radar and missile sighting systems. As a combination of gunship and troop transport, the Mi-24 has no direct NATO counterpart. The airframe is streamlined and fitted with a retractable undercarriage to reduce drag. The cockpits are protected by ballistic-resistant windscreens and are titanium-armoured.