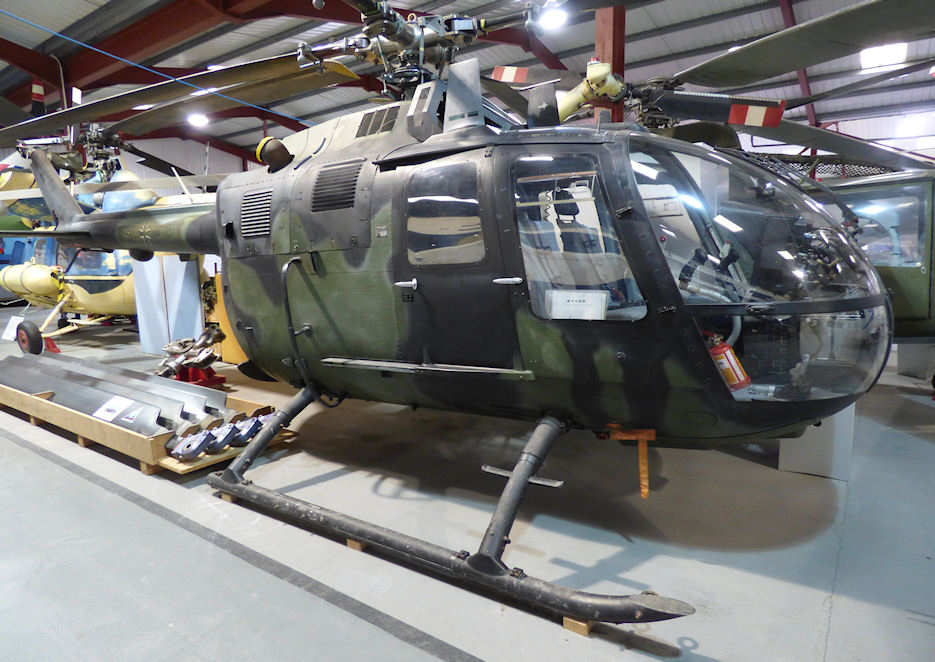 Note: The Bolkow 105 was the first to use a solid titanium rigid rotorhead making it extremely manoeuvrable.

Details: Germany pioneered development of the helicopter and actually was the first country in the world to use them, during the Second World War. However when the conflict ended it was banned from developing or building its own aircraft for more than a decade and it was not until the early 1960s that the aircraft industry began to re-establish itself.

Development by Messerschmitt Bolkow Blohm (MBB) of what was to become the World's first light twin-engined helicopter, the Bo105, began in 1964 when the company identified a market for a turbine-powered helicopter with a 4/5 seat capacity, using a new rigid rotor system.

Manufactured in titanium, the rotor head required neither the flapping nor the drag hinges of it contemporaries and, together with glass fibre blades, represented a completely new approach to rotorhead design. The simplification of the rotorhead and the rigid nature of the system made the Bo105 easier to maintain and extremely manoeuvrable. It was the World's first fully aerobatic helicopter, able to perform rolls, loops and back flips that few, if any, other designs are capable of completing and allowing it to capture the World Helicopter Freestyle Championships when entered in 1992.

Also new was the proposal for a cargo compartment with rear access doors under the tail boom, designed to accept awkward loads and in particular ambulance stretchers for a medical evacuation role. This feature was to help the Bo105 pioneer the air ambulance service in Germany and later in the USA and UK.

The first prototype Bo105 was completed in 1966 but protracted development meant that it was April 1970 before the definitive Bo105A made its initial flight. This marked the beginning of large scale production, with early aircraft being sold mostly into the air ambulance, police and similar markets, where the Bo105 was to remain dominant until succeeded by newer designs in the late 1990s.

Meanwhile the resurgent Federal German Army had a requirement for a new observation/liaison helicopter and an anti-tank helicopter, leading to the Bo105 being selected for these roles in the early 1970s. The initial variant for the observation/liaison (VBH) role was based on the new civil Bo105C and, powered by MTU-assembled Allison 2050-C20 turboshaft engines, was designated the Bo105M.

The anti-tank variant, designated the Bo105P (PAH-1), was also ordered with 212 eventually entering service. These military variants contributed towards the total production of more than 1400 Bo105s before manufacture ended in 1997.