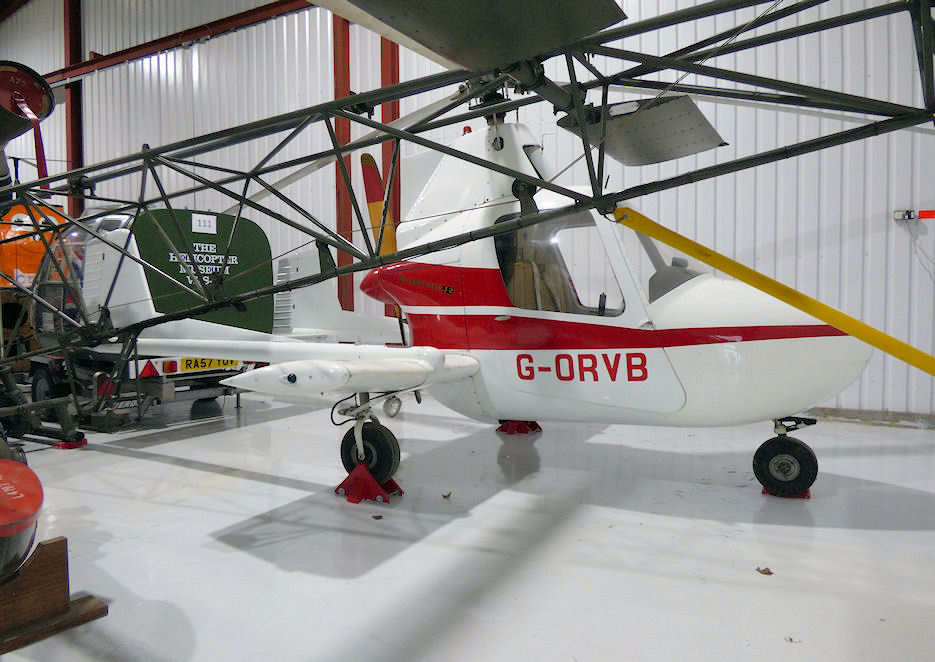 Note: 83 were built. This one was used in Bahrain for police duties and is now the only one in the UK.

Details: This small two-seat autogyro was designed by a Serbian immigrant to the United States, Drago Jovanovich, who helped to found the Helicopter Engineering Research Corporation in Philadelphia PA in 1946.The company initially developed a small tandem-rotor helicopter design, the JOV-3, which was taken over by the McCulloch Motors Corporation in California in 1951 and further developed into the MC4 two-seat helicopter. Although this was eventually abandoned, the forward main rotor system was adopted for the Hughes 269 two-seat helicopter in 1955, which Jovanovich designed for Hughes Aircraft before turning his attention to designing an autogyro with the same rotorhead. This he envisaged being able to operate from areas no larger than a suburban driveway. The result was the J-2, which married the three-bladed rotor system with a two-bladed Sensenich fixed pitch propeller. The rotor could be spun to over 500rpm before takeoff, but was not powered in flight. As the Jovair J-2 the aircraft first flew at Culver City in California in June 1962.

In 1969 rights to the design were taken over by McCulloch who continued development and secured a Certificate of Airworthiness for the aircraft in May 1970. Production was undertaken at Lake Havasu City in Arizona, where 96 J-2s were built over the next three years. In 1974 McCulloch Aircraft was reorganised as Aero Resources Inc and attempts made to market the Super J-2, replacing the original two-blade wooden propeller with a three-bladed Hartzell variable-pitch metal propeller. However none were sold and production was then abandoned.

Unfortunately the use of a modified helicopter main rotor and a non-optional propeller resulted in poor performance and the J-2 never achieved its designer's dream of really short takeoffs and was able to only carry a limited load over short distances. Nevertheless it was a brave attempt to produce a two-seat enclosed-cabin autogyro, one of only three such designs to receive certification to date.

Although a number of J-2s still survive in the United States and overseas, the museum example is one of only two imported into the UK and the only surviving example in the country. Built in 1971 it was originally sold to the Bahrain Public Security Force for police duties. In 1981 it was imported into the UK but flown very little before being purchased by the museum with the aid of a PRISM fund grand in December 2008. It is the only J-2 in the country and one of only three known examples outside North America.