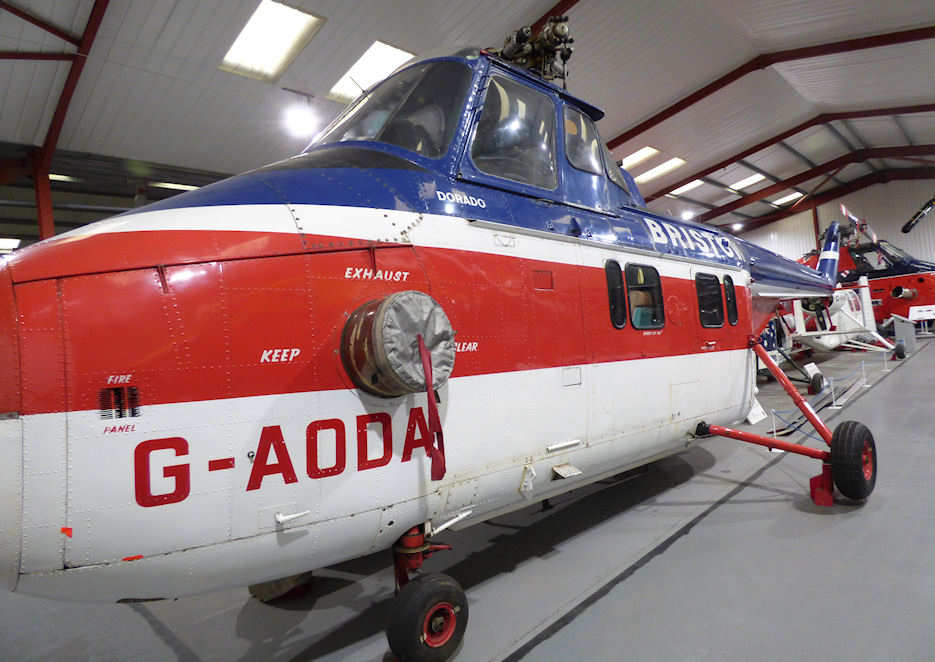 Note: Owned by Shell and operated by Bristow this Whirlwind was used for charter work including oil rig support in the Gulf, Far East and North Sea.

Details: Westland WS-55 Whirlwind Series 3, G-AODA, c/n WA/113, was built in 1955 as one of two Series 1 machines, with 600hp Pratt & Whitney R-1340 radial piston engines, for the Shell Petroleum Company. Initially they operated from Qatar, in the Persian Gulf, supporting exploration oil rigs off Doha. Although owned by Shell the helicopters were managed and crewed by Bristow Helicopters Ltd.

In 1965 G-AODA was the first WS-55 to be converted by Bristow engineers at Redhill, to the Series 3 configuration, with a single 1050 shp Bristol-Siddeley Gnome H1000 turboshaft engine and twelve passenger seats. It was operated by Bristow Helicopters, for charter operations, in Iran as EP-HAC, in Trinidad from 1969 until 1974 as 9Y-TDA and with Conoco in Kuantan, Malaysia. G-AODA was shipped back to the UK in 1975 and was involved in setting up the first SAR units in the North Sea, with BP, in 1978, before returning to Redhill where it was used for pilot training, Command Course assessments and charter work.

In 1980 G-AODA was selected as an aerial trials platform, for BAe Dynamics and GEC/Marconi, in the development of a new anti-tank missile guidance system. This required the installation, by BAe, of extensive new electronic equipment and a large external camera. The trials contract involved several years of very low flying by Bristow pilots, all day, in all weather conditions, at 200 to 300 feet, in the UK and other European countries.

G-AODA remained in airworthy condition, with Bristow, until 1990 when it was retired from duty, having logged over 7600 hours of flight. In August 1993 it was presented to The Helicopter Museum, in Weston-super-Mare.