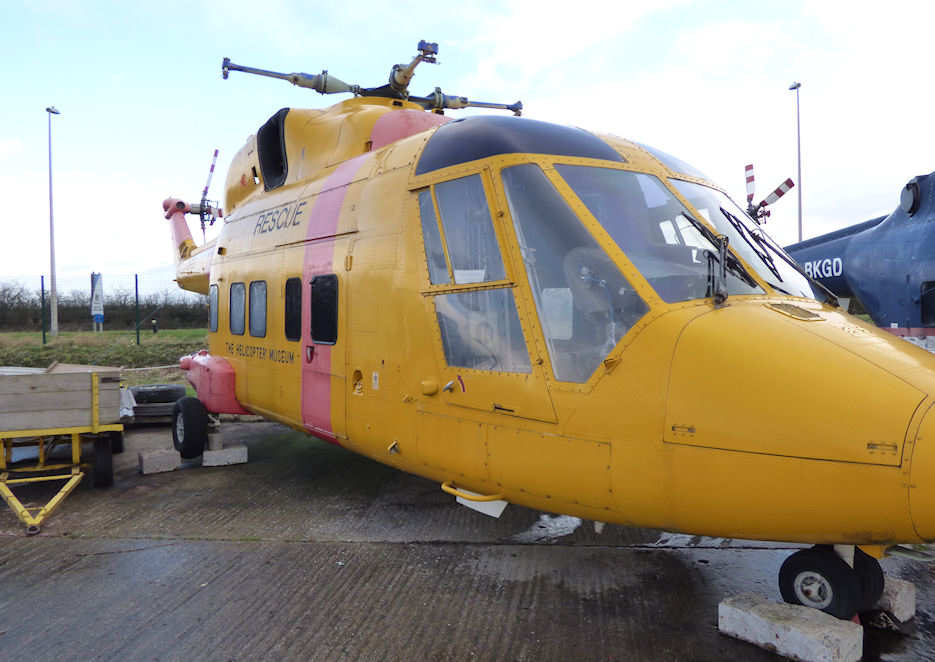 Note: One-off Series 200 demonstrator used for testing the more powerful engine and transmission for the ultimate Series 300. On display outside the Helicopter Museum building..

Details: The WG-30 was a concerted effort by Westland to enter the civil helicopter market, using the engines and rotor system of the Lynx to save development costs, married to a new boxy fuselage able to carry 17-20 passengers.

The chief operator of the WG-30 was Pawan Hans of India. The British government agreed with India to supply 21 Westland 30s for oil exploration duties using a British grant of 65 million pounds. India was reluctant to accept the deal until it was made clear that the aid would not otherwise be forthcoming. The aircraft were delivered to Pawan Hans between 1986 and 1988 for offshore operations on behalf of the Oil and Natural Gas Corporation Limited (ONGC). A similar number of SA 365N Dauphin helicopters were supplied by France. It was soon found that the Westland helicopters were ill-suited to hot and humid Indian conditions, and after two fatal accidents, the fleet was grounded in 1991. The 19 surviving Westland 30s were sold to a British company, but after six had been shipped to the United Kingdom, the deal fell through, and the aircraft are believed to remain in storage in the United Kingdom and India.

G-BKNV was built as a WG-30 Series 100 before being converted to a Series 200 in June 1933 with the General Electric CT7-2B turboshaft engines replacing the Rolls Royce Gem 60s. It was subsequently re-registered as G-ELEC and used by Westland as a Series 200 demonstrator for roles including electricity distribution maintenance, off-shore rigs and Search and Rescue use. No sales were forthcoming and it ceased flying in February 1998 after which it was moved to the Helicopter Museum. It was the only Series 200 built.

G-BKNV / G-ELEC is currently displayed outside in front of The Helicopter Museum in yellow Search and Rescue colours.