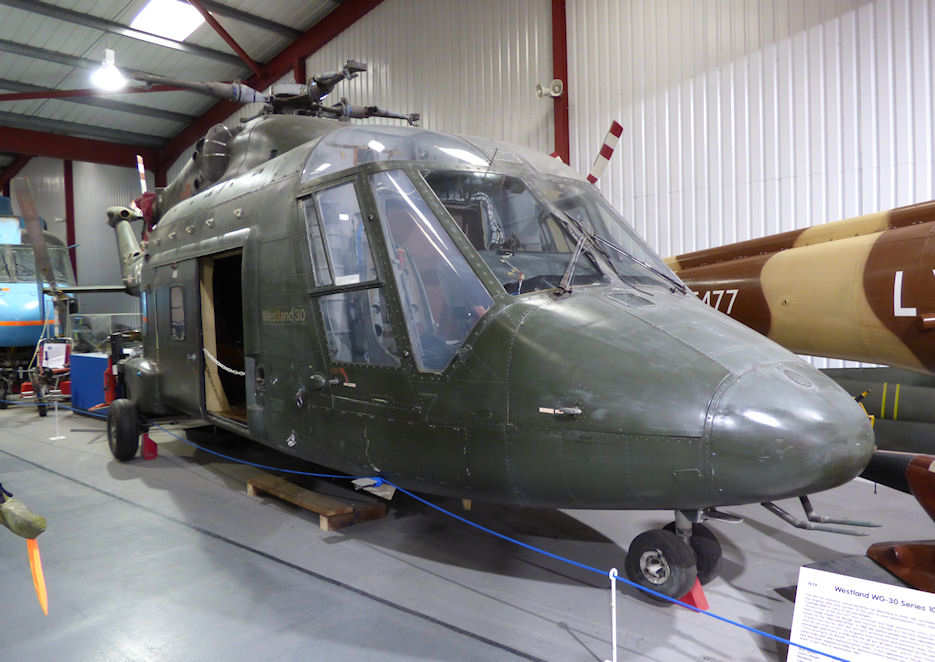 Note: This was the first prototype WG-30 and used by Westland for development and as a demonstrator. It was taken to India for sales demonstrations.

Details: The Westland WG30 was developed by the company from the successful military Lynx family, and used the dynamics system of this helicopter matched to more powerful engines and an entirely new box cabin. The new helicopter was particularly aimed at the then expanding civil commuter market of the late 1970s, but a market depression caused a switch to the military market in the mid 1980s which was also unsuccessful.

G-BGHF was the original WG30 prototype, first flown at Yeovil on 10 April 1979 and subsequently demonstrated at the June 1979 Paris Air Show. Between July 1979 and June 1983 it was used primarily for development work, during which time the original retractable main undercarriage was replaced by fixed wheels, the Lynx tail rotor was replaced by a quieter reverse-direction tail rotor and 1120 Gem 41 engines were replaced by the more powerful 1260 shp Gem 60. Originally painted blue/white, the aircraft also appeared in a brown overall 'military' colour scheme in 1980 and a brown/orange/white sunburst colour scheme from May 1981.

In September 1983 G-BGHF was air-freighted to New Delhi for demonstration to the Indian Air Force and the Oil and Natural Gas Commission, before being returned to the UK for engine certification trials. During the course of these it was damaged at RAE Bedford on 21 June 1984 in a single engine heavy landing but repaired to continue test flying in 1985. G-BGHF last flew on 26 September 1985 and was then placed in storage. In August 1988 Westland agreed to release G-BGHF to The Helicopter Museum and, following some refurbishment work, it was delivered by road to the Helicopter Museum on 10 February 1989.