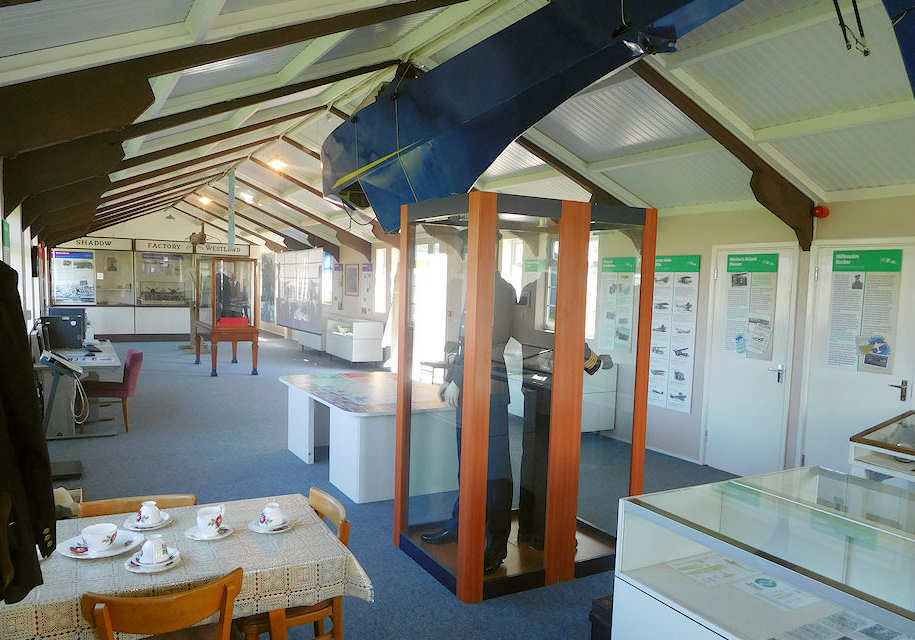 Note: On display in the pilots block as part of the Weston Aviation Exhibition and history of gliding here at Weston airfield.

Details: The Slingsby T.8 Kirby Tutor was a single-seat sports glider produced from 1937, by Fred Slingsby in Kirbymoorside, Yorkshire. It was developed from the earlier T.7 Kirby Kadet, with a new two-spar wing of increased span (43ft 3.75in) and tapered outer wing panels married to the same wooden fuselage and wooden tail unit with braced tailplane as the Kadet's. At the same time a differential mechanism was introduced into the aileron control circuit.

The T.8 Kirby Tutor first flew in July 1937 but only seven complete aircraft were sold before the outbreak of World War II, as well as kits of parts, spares and sets of wings (for retrofit to T.7 Kirby Kadets). The T.8 Tutor was also produced for use by the Air Training Corps as the Slingsby T.8 Cadet TX Mk.2.

Sixty-two Cadet TX Mk.2s were ordered from 1944 with simple windscreens and landing wheels. Postwar Slingsby sub-contracted Martin Hearn Ltd. to build 25 new T.7 Kirby Kadets and 25 new T.8 Kirby Tutors as well as about a dozen more at Kirbymoorside. The interchangeability of the components led to many hybrid aircraft having wings and fuselages of all types mixed together. Total Tutor production was 106, and the price had risen from £99 10s (£99.50) in 1939 to £360 ex-works in 1948. A two-seater version for teaching the initial stages of flying, and suitable for the circuits and bumps of training, was the T.31 Tandem Tutor.

The Helicopter Museum is situated on the historic Weston-super-Mare airfield which was used by nearby RAF Locking for air experience flying and gliding. RAF Gliding School 621 operated here for 40 years from 1955 providing flights for RAF trainees and ATC cadets. The Woodspring Gliding Club, and later the Mendip Gliding club also operated from the North side of the airfield until 1995.

Slingsby Tutor GSA178 was flown by the RAF Gliding School until the late 1960s when urgent inspection of the main-spars for all T.8s was called for. The cost of the inspection and resultant rectification work often exceeded the value of the aircraft and it was withdrawn from use. A Slingsby T.21 (Sedbergh TX.1) two-seater glider was later used.