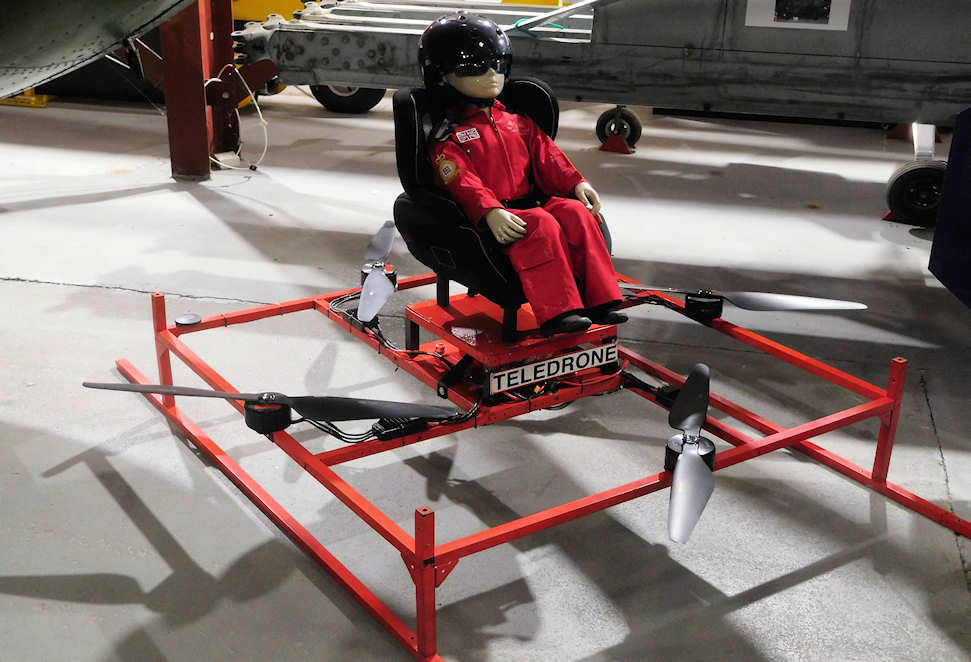 Details: Designed and built by Colin Hilton as a spin-off from an earlier entry into the Boeing sponsored "Gofly" challenge which took place at NASA Ames in California in 2020, the Teledrone Mk.5 was a two thirds scale quadcopter intended to demonstrate the potential for a passenger carrying electric-powered vertical takeoff/landing aircraft capable of being operated semi autonomously from a ground station or by an onboard pilot.

Designed within the constraints of UK and US drone certification regulations the plan was offer the developed aircraft in a modular kit form to customers, for operation either as an aircraft or as ground effect vehicle substitute for boats and hovercraft. In the UK gross weights up to 150kg would have been possible without having to go through more complex and lengthy certification procedures, but in the USA the aircraft could be flown at unladen weights up to 115kg with minimal regulation, making this the target kit market.

The airframe comprised a simple cantilevered centre body over aluminium frame that carried the skid landing gear and mountings for the four electric motor san airscrews. The avionics were situated on the underside and comprised a radio receiver linked to a V aerial and a digital flight controller to which GPS signals were fed from another disc-shaped antenna. The controller was wired in turn to each of four electronic speed controllers. These controlled four 6kw virtual AC motors running off the 45V DC supply drawn from two 22,000mAr LiPo mobile phone battery packs wired in behind the seat. The quad airscrew layout could also be installed above or below the skeletal airframe, or further enhanced by introducing airscrews both above and below in a coaxial octocopter form and thus doubling the power available, although it was never flown in this configuration.

The sole prototype was assembled during 2021 and made its first flight at Frome in Somerset on 2nd Decernber 2021 with a mannequin doll onboard to represent a pilot/passenger. During the 90 second flight, which took place at the focal model flying club field the aircraft was successfully maneuvered in all axes under the control of an experienced model aircraft pilot, Angus Benson-Blair.

This first flight was followed by a brief period of further testing before it was decided to retire the aircraft in favour of moving on with a full scale prototype. The Teledrone Mk.5 was subsequently donated to the Helicopter Museum and delivered on 2nd February 2022.