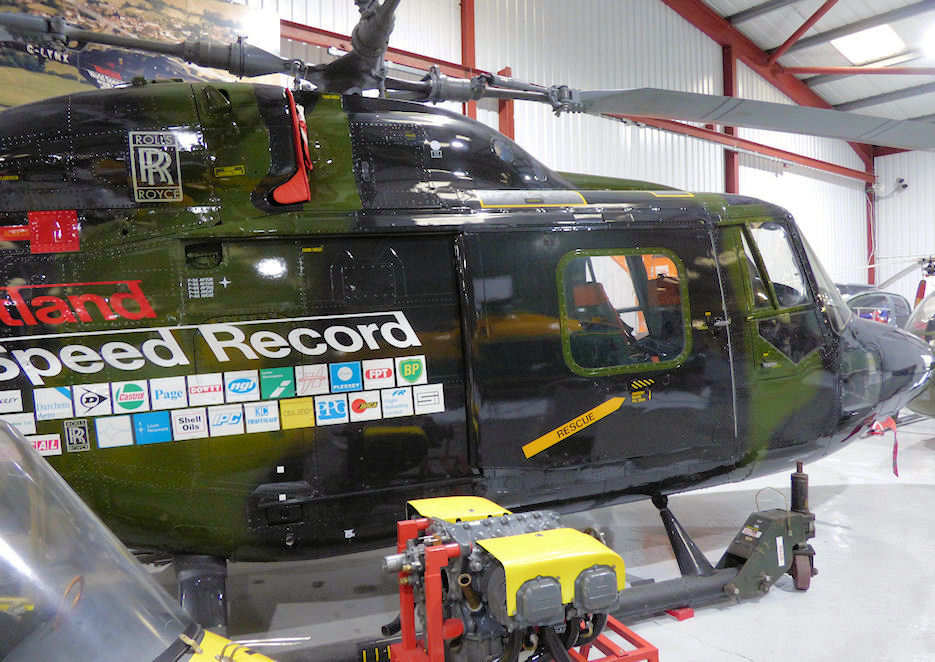 Details: Following initial orders placed for the Lynx AH1 by the Army Air Corps and the Qatar government, Westland built their own demonstration and trials aircraft to encourage export sales and develop new armament options. Assembled in September 1978 the airframe was first moved to the experimental build shop at Yeovil for the installation of weapons hard points and electrical fittings and, on 6th November 1978, was allocated the civil registration of G-LYNX before being completed and painted in an overall gloss camouflage colour scheme in early 1979. It first flew on 18th May 1979 and the following month was displayed at the Paris Air Show, prior to departing to Colmienar in Spain in Military markings (ZA500) for a fire-powered demonstration. This was followed by a Scandinavian demonstration tour in October 1979.

During the winter of 1979/80 the aircraft was re-engined with uprated Gem 4 engines and, in May 1980. It continued to carry the civil registration for non-military demonstration flights. Following tours in Sweden, Switzerland and the Middle East, the aircraft was used for various equipment trials until 1983, when it was fitted with two Gem 60 engines for tests. Following these it was stored for two years before being re-worked in mid-1986 for an attempt on the Helicopter World Air Speed Record. 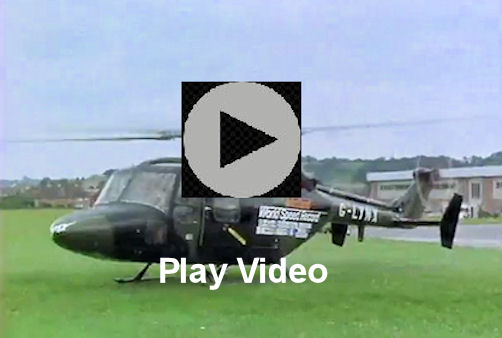 Modification included the addition of water methanol injection to the specially rated Gem 60 engines, an unprated Westland WG 30 main gearbox, aft exhaust jet pipes, installation of the tailplane and offset vertical fins from the WG 30 prototype to counteract the increased torque, and a general clean-up and sealing of the airframe to minimise drag. The single most important change however was the installation of an early set of BERP (British Experimental Rotor Programme) main rotor blades, a unique design using composite materials to shape the blade profile and allow the rotor to produce more lift and power. This profile included a swept 'paddle' tip which slowed down the local airflow and kept speed below Mach 1, preventing the build up of airflow turbulence which normally destroys the aerodynamic lift at higher speeds and thus stops a helicopter from going faster. (The BERP blade concept is now standard on the Lynx and EH101 helicopters).

Following the modification work G-LYNX was reflown on 1st of August 1986 and, following several trial runs, made the actual record attempt on 11th of August over a measured 15km (9 mile) route between Hartlake Bridge and West Huntspill, on the Somerset Levels. The final speed, verified by the FAI, was 400.87 km/h (249.09 mph), a nine percent increase over the previous record set in 1978 by a modified Russian Mil Mi-24

After setting the new world speed record, G-LYNX appeared at the 1986 Farnborough Air Show, and then went into storage except for a brief static appearance at the 1988 Farnborough Air Show, with a mock-up Lynx Mk.9 wheeled undercarriage. The in 1991 the aircraft was modified for flight tests with new 1350 shp LHTEC T800 engines, first flying with this powerplant on 25th September 1991. Later that year, as ZB500, the aircraft was repainted into a new matt desert camouflage colour scheme, but the trials ended soon afterwards and by mid-1992 the helicopter was again in storage with the engines and transmission removed.

In late 1994, Westland agreed to transfer the stripped aircraft to The Helicopter Museum for display and on 19th January 1995 it was relocated to the Helicopter Museum. Although initially on loan for continued spares recovery, ownership was transferred five years later and, so G-LYNX became part of the permanent collection in January 2000. The Museum had meanwhile sourced a main rotorhead, main gearbox, the original BERP blades and other missing components for restoration back into the record-breaking configuration. For this purpose, the original WG30 tail unit and other special components modified for the record attempt, plus two Gem 60 engines, were sent with the aircraft to Westland for installation. The helicopter remained at Yeovil until 8th July 2011 before returning to Weston-Super-Mare for permanent display.