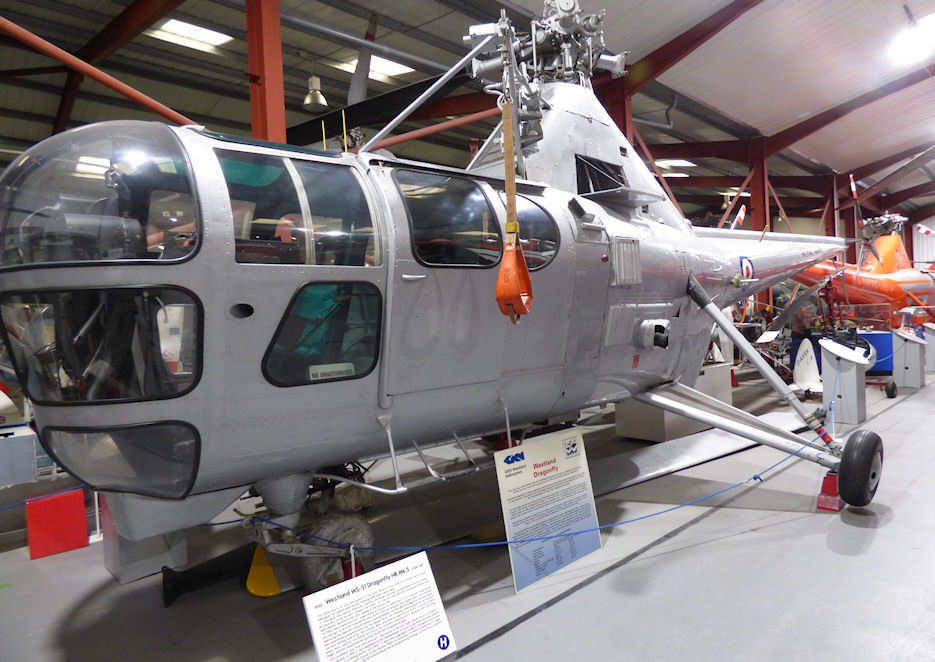 Note: The first helicopter produced by Westland, the Dragonfly was built under licence from Sikorsky and used by the Royal Navy for Search and Rescue. This one took part in the rescue effort during the Dutch Flood disaster in Feb 1953..

Details: The WS-51 was originally a Sikorsky design, anglicised by Westland with a British engine in the late 1940s and marking their debut as helicopter manufacturers. The major customer was the Royal Navy who saw the helicopter as ideal for plane guard duties aboard the aircraft carriers and for Search and Rescue work and other duties. The Dragonfly was used in the SAR and training role and eventually served for some 15 years before being retired in the mid 1960s.

The 50th production Dragonfly WG719 first flew from Yeovil on September 19 1952 as a HR. Mk. 3. It was delivered to No. 705 Squadron, Fleet Air Arm, at Gosport on October 7. In February 1953 four WS-51 Dragonfly helicopters from 705 Squadron including WG719 took part in the relief effort during the Dutch Flood disaster. Stranded people were located, winched up and flown to safety, 200 on the first day and a further 534 by the end of 6th February. Sycamore helicopter G-ALSX (in The Museum) also took part in the rescue operations.

In August 1953 Dragonfly WG719 was taken by HMS Bermuda to Zakynthos Island in Greece for earthquake relief. Arriving on 15 August 1953 it was damaged during sloping ground landing at Argostoli on 20 August 1953. It was recovered to UK by November 1953 and repaired.

In 1957 it was converted by Westland to HR. Mk.5 standard. It then served with the Station Flight at Yeovilton from April 1958 until that September. After a spell of modifications at Fleetlands WG719 joined No.776 Squadron, the Fleet Requirements Unit, in August 1959 until Apri1 1961. It was reconditioned at Fleetlands in June 1961 and then served with the Britannia Royal Navy College, Dartmouth, from September 1963 to April 1967.

In June 1967 it moved for storage at Fleetlands and was sold to Twyford Moors Limited in May 1970, moving to their base at Southampton Heliport. It remained there, in the open, until 1973. It was purchased privately by Elfan ap Rees in November 1973 and loaned to the Fleet Air Arm Museum at Yeovilton, where it was displayed from April 1974 until March 1976. WG719 then moved to Weston-super-Mare for partial refurbishing and was displayed at the 1976 Air Day. Later it was loaned to the Central Flying School Royal Air Force for anniversary celebrations at RAF Shawbury where it was further restored and returned to its original silver overall colour scheme.

On display with The Helicopter Museum from 1989, in January 1990 the aircraft was seriously damaged in 100mph+ gales, overturning and sustaining broken cockpit glazings, tailboom and main rotorblades. The blades and boom were repaired by the Apprentice Training School at Westland Industrial Products and new cockpit glazings were manufactured.