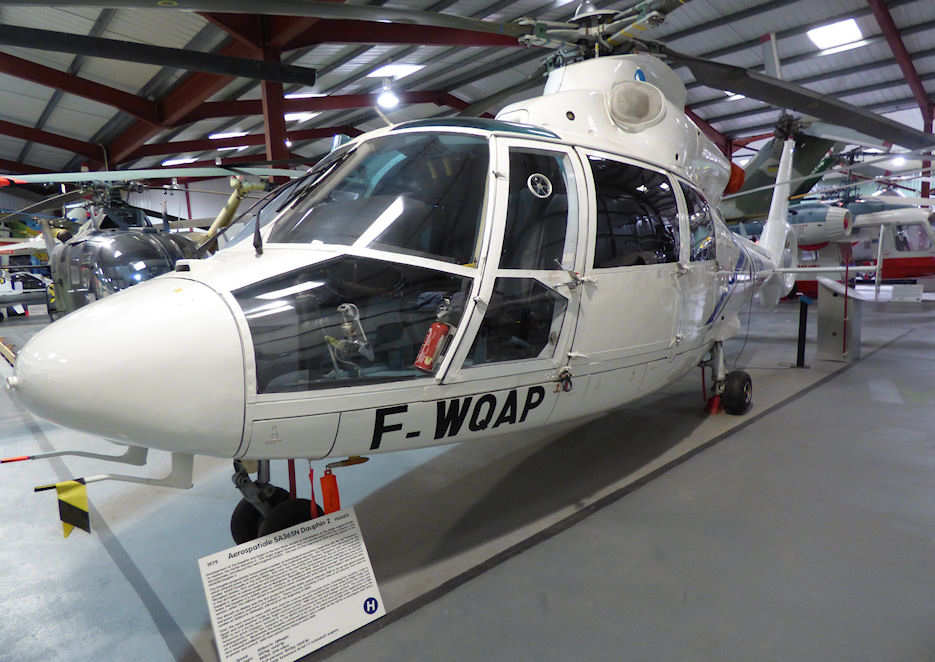 Note: This helicopter set a speed record of 200mph between London and Paris heliports. It was used to test Fly-by-Wire control systems.

Details: Development of the Dauphin was begun in the late 1960s, initially by Sud Aviation, as the single-engined SA360 to replace the SA316 Alouette 3. The single engine however was not popular and in 1975 the company, now Aerospatiale, introduced the twin-engined SA365C. This was further improved in 1979 with the advent of the SA365N Dauphin 2.

The Dauphin progressively incorporated a number of technological innovations, beginning with the tail 'fenestron', which offered power and safety advantages over the traditional tail rotor. This had first been developed for the smaller SA341 Gazelle in the mid 1965. Also new was the composite 'Starflex' hingeless main rotorhead with fibreglass blades, first used in the AS350 Ecureuil in the mid 1975 and followed by the use of more composites in the airframe to reduce weight and manufacturing costs. These innovations all came together in the SA365N Dauphin 2, which entered production at Marignane, Marseilles in 1979. Since then more than 600 have been built. Today the Dauphin 2 is widely used for offshore, air ambulance and corporate passenger operations in its civil version, whilst the military variant is operated in naval, coastguard, army and air force support and attack roles.

The aircraft on display was the first production SA365N (6001), used in February 1980 to set up new speed records between London and Paris city heliports. These records, including a best time of 63 minutes from Paris to London at 322km/hr (200mph), still stood at the beginning of 2003.

Over the next several years 6001 was used for a series of certification tests, including hot weather trials in Egypt and cold weather trials in Sweden, before being uniquely modified for a new series of flight trials from 1989 to test a fly-by-wire (FBW) flight control system. FBW uses electrical signals to activate the rotor and fenestron pitch changes, instead of the traditional mechanical rod and linkage method. The system was subsequently used by the company on the NH90 helicopter in the first-ever production application of FBW on a helicopter. Meanwhile the Dauphin continued to be used for experimental FBW trials, culminating in the very unusual installation of all-moving horizontal stabilisers and a rudder on the tail fin to investigate their effect on power and control. 6001 was retired from flying in early 2001.