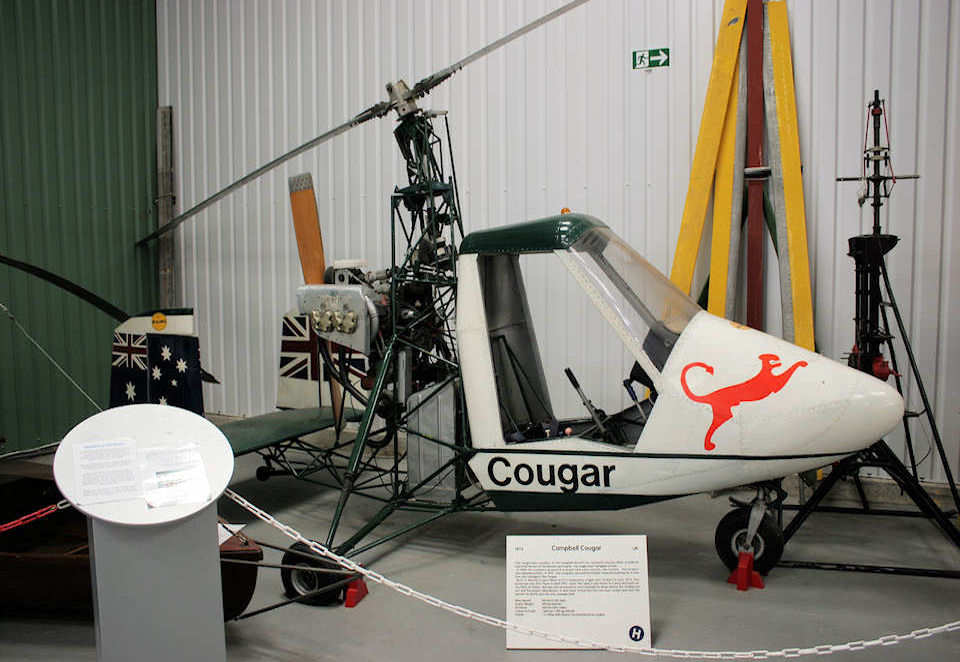 Note: The sole prototype Cougar was built here at Weston-super-Mare.

Details: The Cougar was a product of the Campbell Aircraft Co., formed in the late 1950s to build an improved version of the Bensen gyrocopter, the single-seat Campbell Cricket.

In 1969 the company proposed a larger two-seat version, the Curlew. This project was abandoned but, in 1972 the company secured Australian financial backing for a new two-seat autogyro, the Cougar.

This prototype Cougar was built at Weston-super-Mare by Western Airways under contract to Campbell Aircraft. It had a 130hp Rolls Royce Continental engine, semi-enclosed cockpit and, fitted temporarily with a single seat, first flew at Weston in April 1973 flying circuits around the airfield.

In May that year it was taken to Le Bourget, France, for the Paris Air Show, and was also promoted at the Cranfield Air Show. However with no orders forthcoming the funding ran out and the project was abandoned. It was never fitted with the two-seat cockpit and thus this aircraft (G-BAPS) was the only example built. It was stored at Western Airways until its Certificate of Airworthiness expired in 1974 when it was presented to the Helicopter Museum next door to where it was built.