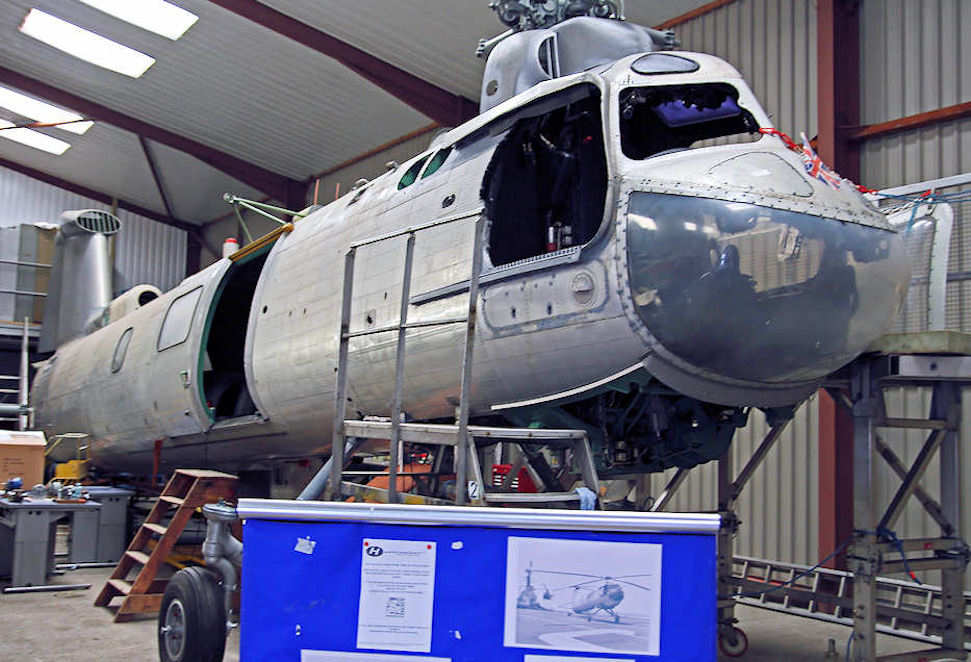 Note: Designed and built here at Weston-super-Mare the Belvedere tandem-rotor helicopter served with British forces 18 years before the Chinook. In 1962 a Belvedere lowered the 80ft tall spire onto the rebuilt Coventry cathedral.

The Belvedere tandem-rotor helicopter was the culmination of ten years work by the former Bristol Helicopter Company on this type of rotorcraft lay-out. Originally designed to meet a Royal Navy of requirement for a carrier-borne search and strike helicopter (hence the legacy of an almost window-less cabin, a high front undercarriage, and the ship-dictated dimensions), the Belvedere was eventually ordered for the Royal Air Force, and served with distinction in Aden and in during the Indonesian confrontation of the mid-sixties. Only 26 were built, all at Weston-super-Mare. There are only three remaining examples of which XG452 and XG454 are here in The Helicopter Museum.

XG452 was originally the 5th pre-production airframe, first flown at Weston Airport on 26th February 1960. After trials at A&AEE, Boscombe Down, it was flown to Gatwick Airport in June 1960, for a series of record-breaking flights to Libya. Leaving Gatwick at 4.30 a.m. on 14th June XG452 reached Rome in 8 hours 13 minutes, Malta in 12 hours 6 minutes, and Idris in 13 hours 57 minutes. After trials in Libya and the French Alps, XG452 returned to England for the 1960 Farnborough Air Show and then flew back to Weston-super-Mare, where it was based as an experimental aircraft until 1967. It was then refurbished for delivery to the RAF but was declared surplus to operational requirements soon after re-flying in August 1967. XG452 was eventually delivered by road to RAF Cosford for use as a training air-frame and in 1972 was moved to RAF Ternhill for fire practice.

In 1973 it was purchased privately by Elfan ap Rees for preservation and on November 5th, 1974, was delivered by road to Weston-super-Mare where a specially formed Westland Belvedere Preservation Group had undertaken to restore the aircraft at Weston-super-Mare's Oldmixon factory. Initial restoration work concentrated on refurbishing the cockpit and cabin area and recovering missing components including engines, rotorheads, rotorblades and other parts from a variety of sources, including Singapore, where most of the Belvedere fleet was scrapped in 1969.

In June 1978 XG452 was registered G-BRMB and transferred to The Helicopter Museum for further restoration. Brand new rotorheads, a spare new nose section, engine, and other parts are currently held in storage. Total flying hours: 487.