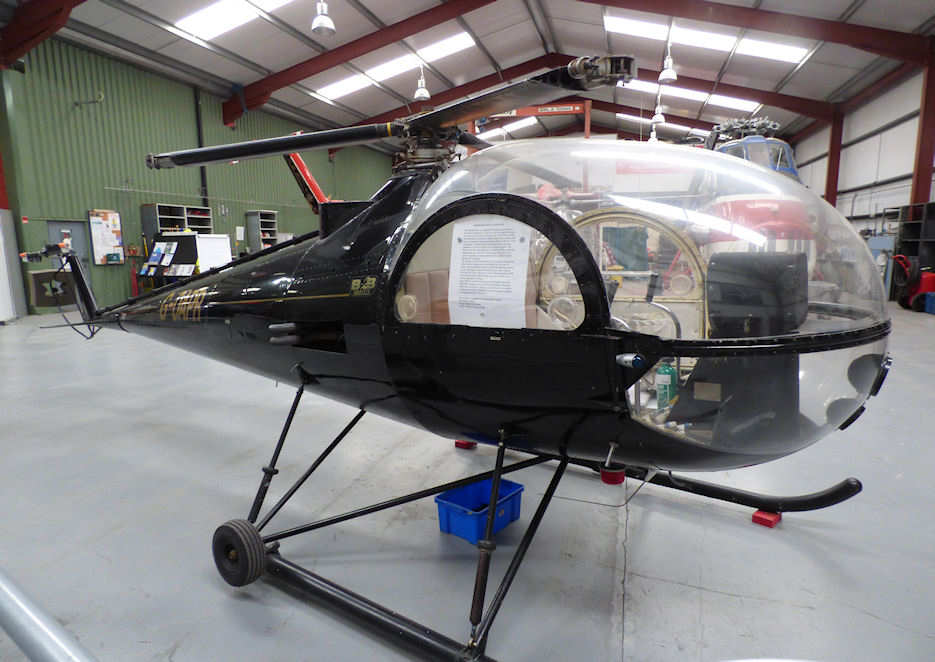 Note: G-OAPR is in airworthy condition and has been used for flight demonstrations and other special events, at The Museum and in the neighbouring locality.

Details: The Brantly B.2 was originally developed and built at Frederick, Oklahoma, USA as a two-seat light helicopter for private ownership and pilot training use. It first flew in 1953.

It introduced a unique main rotor control system with lag and duplicate flapping hinges placed outboard of the rotor head at the end of aerodynamically-faired stub arms. This simplified the rotor head and reduced the vibration level through the dynamic system. Since the majority of lift from a rotor blade comes from the outer portion, the shorter blades on the B.2 did not cause any significant reduction in performance.

A second feature on the B.2 was the drive from the main gearbox, which did away with the usual rotor mast. Whilst this resulted in a very low rotor disc, especially when the helicopter was at rest, it also gave a low centre of gravity, reducing the risk of a roll-over during takeoff or landing.

Improvements to the basic design eventually led to the B.2B, which introduced a new cockpit canopy and other minor changes. The B2B was trialled by both the US Army and the British Army as a possible training aircraft, but its lasting claim to fame was a role in the James Bond movie 'You Only Live Twice', when an all-black B.2B was used to fly the chief villain to his secret hideaway inside a volcano somewhere in the Japanese archipelago.

Some 500, B.2 and B.2B helicopters had been produced and a number are still operational in the USA, Canada, China and the UK. The Museum has two B.2Bs on display G-OAPR / N228OU and G-ATFG. G-OAPR is in airworthy condition and has been used for flight demonstrations and other special events, at The Museum and in the neighbouring locality, for many years.