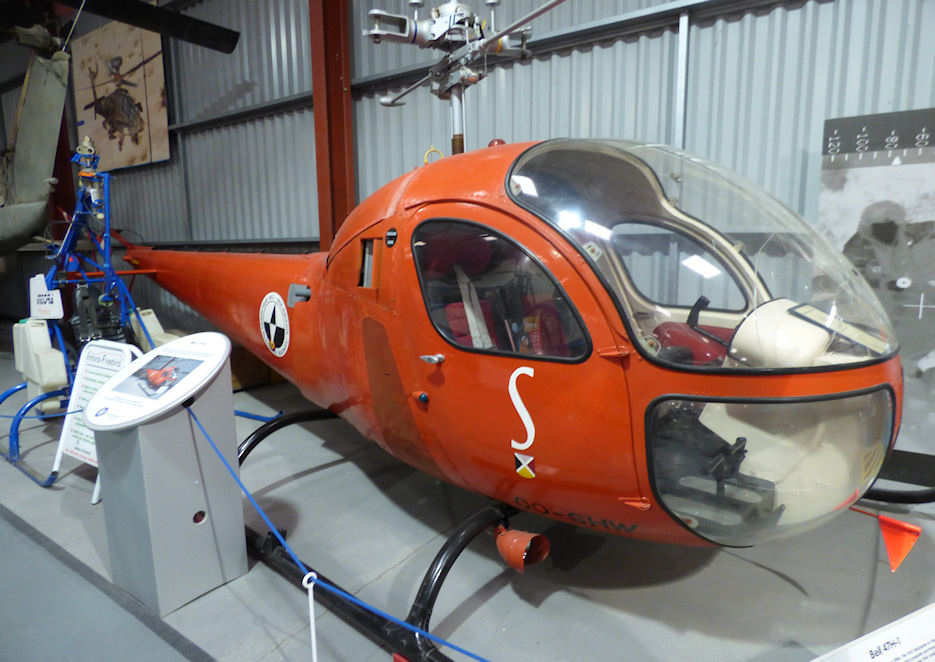 Note: One of only 33 built. This example painted in a bright colour scheme, and with a badge designed by the Belgian artist Herge, creator of 'TinTin', was used to support the Belgian Antarctic Surveys of 1957-1961.

Details: The original skeletal Bell Model 47 became, in 1946, the first helicopter in the world to be certified for commercial use, afterwards becoming a popular purchase for utility operations world-wide. By the 1950s there was a growing view that small helicopters might replace the automobile.

Bell attempted to meet this market with the Model 47H 'Bellairus', replacing the Model 47G open framework structure with a streamlined fuselage, and installing a deluxe cockpit interior to resemble an American automobile of the period. Unfortunately the Bellairus was not successful, as the costs were simply too much for most car owners, and only 33 were ever built.

This example (OO-SHW) was the only Bellairus to come to Europe, purchased by Sabena Airlines in Belgium. Painted in a bright colour scheme, and with a badge designed by the Belgian artist Herge, creator of 'TinTin', OO-SHW was used to support the Belgian Antarctic Surveys of 1957-1961, operating from the support ship Polarnav and the Antarctic mainland.

More than 20 years later, under new ownership in the UK, it was badly damaged in a heavy landing following an engine break-up, when the tail was sliced off by the main rotor and the centre frame structure bent. Following delivery to the museum and initial storage, repair of the damaged areas and restoration of the airframe and engine was undertaken by volunteers over a 10 year period.